Over crowded and cliched? I know it sounds odd but I wasn’t sure about Venice however after just 2 hours there I was, quite simply, enchanted. Yes it was busy and yes there was the occasional “aroma” from the canals but there was also music, beauty, love and jaw dropping views. There is simply nowhere on earth like it (and no, the Venetian in Vegas doesn’t count!)

Step into the maze and the breathtaking madness

Venice is a maze.  A maze of streets, canals, alleyways, and people.  We arrived at about 2pm in the afternoon and it was only for the day but we had scheduled it so that we arrived late and left late in a bid to avoid the crowds.  We may be tourists too but we  wanted to be able to see beyond the others to try and catch a glimpse of the Venice we had in our heads.

It was July and incredibly hot.  May or September would have been a better time to visit but for us it was now or we’d have to wait another few years before we were near the city again.  When we first arrived we had a map and a desire to not get lost but by the end of the day we had been absorbed by the city, the map had been left on a cafe table and we were happy to meander amongst the narrow streetss with no plan of what we would see so each new place was a surprise – I’d really encourage you to do the same from the moment you get there.  The place is awash with tour groups blindly following an umbrella or flag at the front of the group but in my mind this is no way to see any city let alone somewhere as stunning as Venice.

Venice is a beauty but she is expensive too, however much you think would be a crazy price for a coffee or a sandwhich, double it and thats what you’ll pay in Venice – more if you sit on the square.  If you are on a budget then eat and drink on the move – pizza stalls and ice cream parlours are a plenty and, whilst still on the expensive side at least you can sustain yourself for most of the day without needing a mortgage. If money is no issue then take your seat in the square , sip your chilled wine and people watch the magnificent assortment of humanity you will see pass by – from frazzled history seeking famlilies and camera laden groups of tourists, to chic Italian couples unfazed by the heart of the day, the mix is eclectic.

Now i knew they would be pricey but I couldn’t come to Venice and not ride a Gondola.  Current prices are around 80 euros for about 40mins or 100 euros and up at night – so they are not for the budget traveller but they are a great experience and I enjoyed them more than I thought I would.  There are parts of Venice you can only see from the water and the gondola is the perfect way to explore.  Yes there is the occasional whiff from the canals, especially when it is so hot, but my romanticism blocked this out as we were propelled along, lying back in the sunshine with our guide singing as we went.

Remember to look up

Whether it’s shops filled with Venetian masquerade masks (I so want to come back for the famous masquerade ball!) or the slightly temperamental Venetians tutting at the tourists, thee are many distractions as you walk around but make sure you take the time to look up.  This a city of architecture .  Nowhere is this more so than Basilica DI San Marco.. An awe inspiring building for believers and non believers alike.

Every time I visit a major church or Cathedral I make my donation and light a candle for my Nan who was a believer and never got to see these sights with her own eyes. 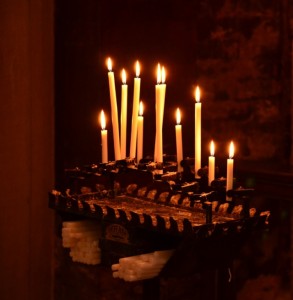 I always feel emotional as I leave the light there in her memory but nowhere more so than in Venice where the scale, beauty and peace of the space is a pleasure to behold whatever your belief system.   I will forever remember Venice for that. 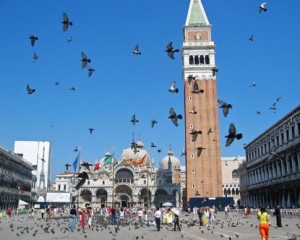 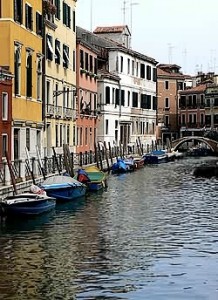 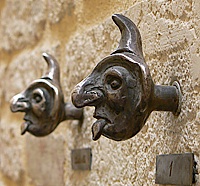 What a difference a day makes

i loved Venice by day but as dusk fell, the majority of coach parties left and the crowds thinned I fell in love all over again.  Venice at night stole my heart as it was simply magical.  St Mark’s square becomes filled with music as small orchestras  appear.  The days cafés transform into restaurants and yes the prices climb too but there are few places as special to eat a meal in the balmy heat of an Italian summer evening.

Gondolas bob in their moorings, the bridge of sighs looks even more stunning in the dusk and for the first time all day you can stand still and breathe the city in without being jostled.  If you only ever get to see Venice once,  my advice is to see it in the early evening.

A city of contrasts

Having eaten some Italian delights, take the time now to savour the real Venice.  No wonder the Venetians can be so prickly during the day as this is the city they know.  The veil of tourist overload has been removed and another side to Venice is revealed for those who linger.

It is beautiful and romantic and Unique. There are anomalies though.  I remember stood looking into the main square when almost out of nowhere the street hawkers began to appear and soon, in the final shadows of the day, a bizarre collection of items were laid out for all to see.  When we were there these included a crawling toy soldier who moved across the floor before firing a weapon that crackled in the night and, most weird of them all, a white rabbit toy that hopped three times and then did a somersault.  This was only made all the stranger by the fact that the rabbits ( and there were many of them) had illuminated red eyes so in the shadow of the cathedral it now appeared as if a plague of bunnies with mixamatosis  had invaded!  A bizarrely memorable picture.

When the time came to leave my heart broke a little but the journey back to our transport was a great way to say goodbye.  We took a water bus and this boat took us along the canals and gave a glimpse of grand houses, private jettys and lifestyles that were every different from our own.

The visit was over but in a day Venice had cast it’s spell and I was enchanted.  Imagine if we had stayed for longer ….. 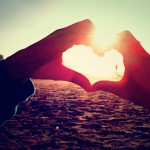 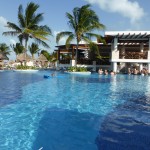 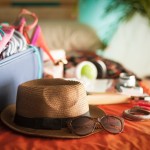 Always travel with a hat 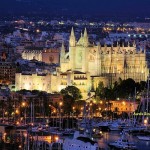 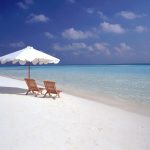 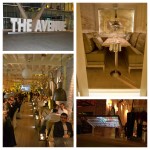 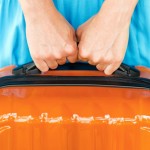 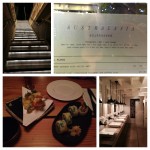 Amazing food in a stylish setting 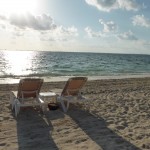 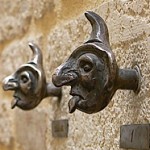 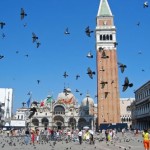 Venice I love you 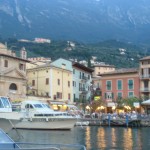 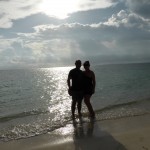 It’s about the who not the where 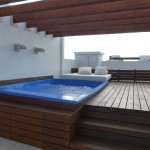 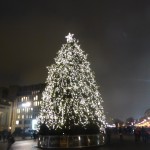